1973 – Candidate of Science (PhD equivalent) in Physics and Mathematics.

– Rector of the Church of St. Nicholas in Kuznetskaia Sloboda and tributary churches in Moscow

– Member of the Inter-conciliar Assembly, the Synodal Commission for the Canonization of Saints (secretary), the Publishing Council of the Russian Orthodox Church, the Patriarchal Council for Family and the Protection of Motherhood, the Editorial Board of the Orthodox Encyclopedia; Member of the Board of the Coordination Center for the Development of Academic Theology in the Russian Orthodox Church, and the College of the Moscow Patriarchate Department for Church Charity and Social Ministry, the Editorial Board of the Journal Pravoslavnaia Beseda [Orthodox Dialogue], and other church and secular academic/educational bodies and organizations

Father Vladimir Vorobyov was born in Moscow in 1941. From 1959 to 1965, he studied at the Faculty of Physics of the Lomonosov Moscow State University (MSU), from which he graduated in 1965. In 1970, he completed his postgraduate studies at MSU, defended his thesis in 1973, and received his PhD in Physics and Mathematics.

From 1970 to 1980, Father Vladimir worked at the Computational Center of the USSR Academy of Sciences.

In 1979, Father Vladimir Vorobyov was ordained a priest. In 1982, he graduated from the Moscow Theological Academy. In 1997, he was appointed rector of St. Nicholas Church in Kuznetskaia Sloboda and of the tributary Church of the Life-Giving Trinity in Vishniaki, which was reopened and restored under his leadership. Under the guidance of Father Vladimir, St. Peter’s Orthodox School and the Sunday School of the Church of St. Nicholas in Kuznetsy, children’s camps, and the Pravoslavnyi mir [Orthodox World] bookstore were founded.

Archpriest Vladimir was one of the organizers of Theological and Catechetical Courses beginning in 1990, and in 1991 he was elected rector of the same. After the courses were transformed into Saint Tikhon’s Orthodox Theological Institute, he was appointed rector in March 1992. In May 2004, the Institute was accorded university status and transformed into Saint Tikhon’s Orthodox University for the Humanities (STOUH).

In 1997, Archpriest Vladimir Vorobyov received the title of professor.

Under Archpriest Vladimir’s leadership, STOTI and STOUH developed a state educational multi-denominational standard for theology, which became the basis the state-classified major in Theology and for creating theological faculties and departments at state universities.

In 1998, Archpriest Vladimir Vorobyov became a member of the Synodal Commission on the Canonization of Saints and took an active part in preparing the large-scale canonization of the New Martyrs and Confessors of Russia at the Jubilee Council of Bishops of the Russian Orthodox Church in 2000. Under his guidance, an icon of the Synaxis of New Martyrs and Confessors of the Church of Russia was painted for the canonization at STOUH.

Since 2000, he has served as Deputy Chairman of the Council for Theological Eduation and Teaching Methodology as part of the Association for Classical University Education at Lomonosov Moscow State University.

In 2007 he received the degree of Doctor of Theology honoris causa from Saint Serge Orthodox Theological Institute in Paris.

Since October 2015, he has been Chair of the Federal Association for Theological Education and Teaching Methodology and Secretary of the Synodal Commission for the Canonization of Saints.

Father Vladimir is Editor-in-Chief of the STOUH periodicals: Theological Collection (1992–2003), all five series of Saint Tikhon’s University Review (from 2003), as well as Editor-in-Chief of STOUH Publishing House. He has authored more than 120 publications on church history, liturgical tradition, pastoral theology, religious education, and various problems of church life. 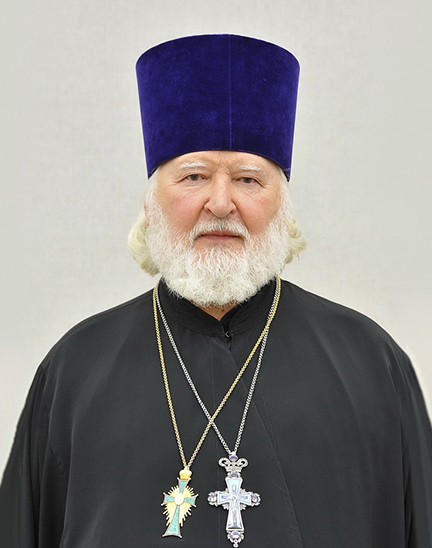 Doctor of Theology, Candidate of Theology Dean of the Faculty of Theology, Head of the Department of Practical Theology, employee of the Scientific Center for the History of Theology and Theological Education +7 (495) 772-95-90 доб.12477 pinb_bf@mail.ru Likhov 6